The new Transmission Electron Microscope (TEM) installed at the Common Technological Resources Consortium (CMTC), was inaugurated on Monday 19 January in the presence of Yves Bréchet, Director of the Laboratory of Excellence, CEMAM, and its supervisory authorities. There were about 150 people in the Besson amphitheatre of the Phelma Campus to have answered the invitation of CEMAM’s director to inaugurate the brand new TEM-FEG. This item of equipment was purchased by the Labex CEMAM* in partnership with the Observatoire des Sciences de l’Univers de Grenoble (OSUG), the Institut Carnot Energie du Futur and the company NanoMEGAS, specialised in scientific instrumentation. “The TEM is everything but a dead piece of equipment,” emphasised Yves Bréchet in his opening speech. “On the contrary, it’s an instrument that’s used to build tools that allow us to control materials.” Given that the CEMAM’s role is to design, produce and characterise “hybrid materials” in which it is necessary to master the microstructures

From left to right : 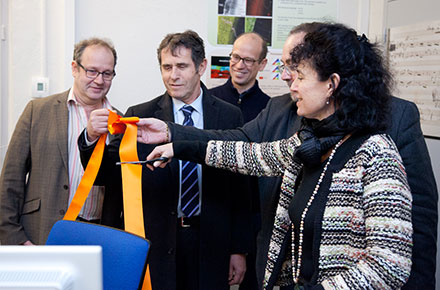 In addition to the scientific contributors, the representatives of the different supervisory authorities of the Labex CEMAM were present, including Daniel Brissaud, temporary administrator of the Université Grenoble Alpes, Jérôme Vitre, Regional Director of the CNRS for the Alps sector and, of course, Patrick Lévy, the President of the Université Joseph Fourier and Brigitte Plateau, General Administrator of Grenoble INP. “This inauguration is both the consecration of the CEMAM’s indisputable success and the promise of much success to come”, emphasised Brigitte Plateau in her speech. Indeed, this is the second major acquisition in the framework of the CEMAM: last year, we inaugurated an Electron Beam Melting (EBM) unit, the only one of its kind in a French University. EBM combines materials science with design systems, and uses electrons to formulate materials with complex architectures. Simply put, it is a high performance 3D printer. With the inauguration of the TEM today, we’re witnessing the association of materials sciences and earth sciences, with the use of electrons to better visualise materials and understand them.”

“This was made possible thanks to the successes achieved by the CEMAM, which have led to finding the joint funding required to obtain this acquisition. It already augurs promising collaborations for the future, like the partnership with the SMB NanoMEGAS, specialised in scientific instruments, which distributes the ACOM /ASTAR software developed in the SIMAP laboratory.”

As for Patrick Lévy, his speech described the efficiency of the partnership between the actors of Grenoble: “This inauguration today is the result of a longstanding partnership between all the universities of Grenoble, and those of our academic and economic partners. The recent labelling of the site at FrenchTech is a positive sign in support of growth in our region. Our success with IDEX, which we couldn’t miss (this time round), will conclude the efforts of the last two years in which we’ve been able to show our strengths.” 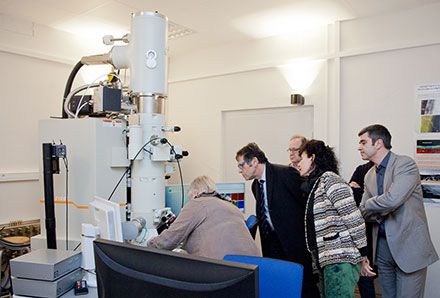