Duplex stainless steels (DSS) are iron-chromium-nickel-molybdenum dual-phased alloys (Fig.1) in which the proportions of the constituent elements enable the optimization of the volume fraction of austenite and ferrite. They are very interesting materials with respect to their mechanical properties (Fig.2), due to the combination of the two phases in the microstructure. The BCC ferrite structure has numerous slip systems and high stacking fault energy (SFE), whereas the FCC austenite presents lower SFE with fewer slip systems. Depending on its SFE, austenite can deform by different deformation modes, such as: slip, mechanical twinning or strain induced martensite formation (TRIP effect). 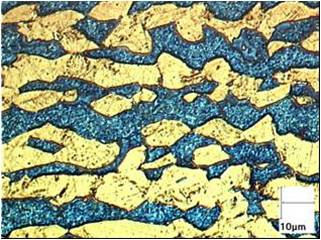 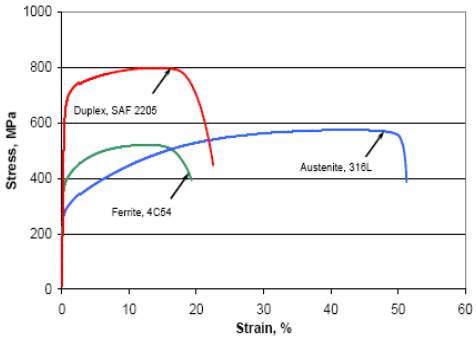 The thesis project's main objectives are: first, to provide an exploration of different architectures of the two phases with different alloy chemistry, geometry and microscale, in terms of resulting multi-functional properties, as a guideline for future industrial applications. And second, to provide simpler geometries of the architecture between the two phases, that may make modeling of the microstructure / properties relationship possible, opening the way to microstructure optimization in the future.
This research project requires the use of a large number of tools ranging from materials processing (making the architecture microstructures), structural characterization at various scales, properties testing (including mechanical properties and thermal conductivity) and modeling.
The first year will be devoted to the design and the realization of architectured model materials. Different geometries (Fig.3) can be made using the facilities at the Ugitech research centre.

- Geometries will be produced with individual wires of ferrite and austenite gathered in a containing tube following by successive steps of wire drawing and diffusion annealing operations. 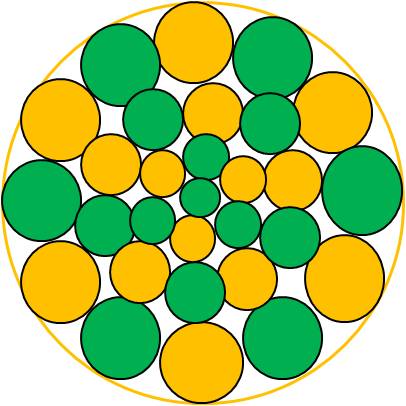 These model materials can be representative of composite material and the distribution, thickness and chemical composition of each phase can be simulated. Other parameters like austenite stability with respect to martensite transformation or phase ratio may also be studied. This type of composite has already been developed for high conducting materials, but not with steel phases targeting weight saving and construction applications. Simple structures made by DSS wires can be designed. Then drawing a multi-wire structure, and repeating this operation several times will produce a material with a very fine microstructure containing micro or nano domains of ferrite and austenite. This will lead to new mechanical properties in the deformed state. During annealing, we can assume that the dual phase structure will impair the growth of the domain phases and modification of the phases architecture can be performed by varying the annealing treatments. For instance thermal treatment can be performed to obtain a spherodization of the ferrite phase with improved thermal and mechanical resistance.
The second year will include characterization of the microstructures at SIMAP (SEM, EBSD, TEM, ACOM orientation mapping, 3D imaging...), and the related properties at Ugitech and SIMAP (yield and tensile stresses, elongation and ductility, thermal or electrical conductivity measurements). A particular attention will concern the characterization of the different interfaces (wires, phases, grains).
During the third year, modelling will be the aimed at taking into account the individual mechanical properties of each phase, their geometrical arrangement and the interfaces to predict the most reliable description of the macroscopic behaviour of the composite.
A+Augmenter la taille du texteA-Réduire la taille du texteImprimer le documentEnvoyer cette page par mail Partagez cet article Facebook Twitter Linked In